The 11th edition of the Cambodia International Film Festival ( CIFF) commences from today featuring films from  26 countries through a selection of 150 films, including short and feature films, documentaries, and animation. 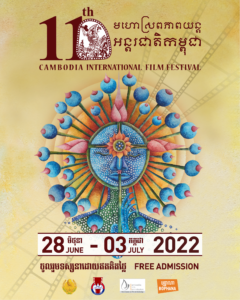 The festival kicked off with the Opening Ceremony of the 11th CIFF took place the Chaktomuk Conference Hall on the 28th June, 2022 attended by filmmakers, producers, actors, corporations, government officials and more.

The 11th Cambodian International Film Festival was made possible thanks to the Royal Government of Cambodia, especially the Ministry of Culture and Fine Arts, which has been working tirelessly to restore safety and space to the Arts.

Cambodia International Film Festival is Cambodia’s largest international film and cultural event. Initiated in 2010, it acts as a catalyst for the film sector initiative gathering more than 20,000 participants each year. CIFF also acts as a bridge between Cambodia and the world through the universal language of film and culture; CIFF also promotes the circulation of films within the region and promotes Cambodian productions.

Admission is FREE on a first come first served.

Tickets are available  1 Hour before each screening at CIFF counters on site.

The detailed program, schedule, and information on events and special guests will be released online: