It went viral today. Jessa Jada Khan (Instagram), an American, who also identifies herself as half Mexican half Cambodian, just won a Gold Medal in Jiu-Jitsu at Asian Games 2018 in Jakarta, Indonesia. Born to a Cambodian father, 16-year-old Jessa (ខាន់ ចេសា in Khmer) was seen active on social media, taking part in a lot of BJJ (Brazilian jiu-jitsu) combats. On a website, Jessa Khan is described as a BJJ fighter that trains at Art of Jiu-Jitsu academy. On her instagram page, Jessa also displays very strong enthusiasm for sports as a 3x World Champion, 3x Pan Am Champion, and 2x Nogi World Champion.

A bit about Jiu-Jitsu: its a martial art and combat sport system that focuses on grappling and especially ground fighting.

Let the beauty of what you love, be what you do || @artofjiujitsu ?

Her father, Peter Khan, was also seen teaching her Jiu-Jitsu combat in this Instagram video:

Jessa and her father (on the right)

What an amazing day I had. I am blessed, and truly honor to be promoted to Black Belt by the @mendesbros. I never thought this day will happen, I just wanted to be a father supporting my kids do BJJ, but I was THAT dad. I said to myself if my kids can do it, maybe I can. I want to thank @kwbjj to keep pushing me to try a class, and @gustavomachadobjj for being patient with me as I grew into a practitioner, and my wife for allowing me to continue to train and support me in my journey. Brazilian Jiu Jitsu has made me a better person, husband and father. #AOJ #AOJUNCLES #FAIXAPRETA 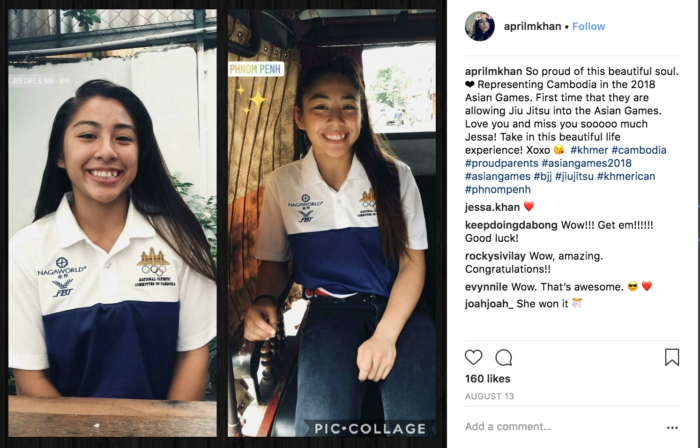 Near You! Total Cambodge Opens 4 New Services Stations to Celebrate its 25th Anniversary

Talk Of The Town: Re-opening The Economy

When in Phnom Penh May 4, 2020
Discover
Recent Posts