The US Agency for International Development (USAID) and the Ministry of Environment led monks and youth to inspect the work of rangers protecting Prey Lang in Kampong Thom province on Monday and Tuesday. USAID representative at the event, Seng Sothira, said the visit was part of a campaign to protect Prey Lang by changing social behaviour under a project called Cambodia Green Future.

“The US government places a high value on the importance of the environment and we partner with the government of Cambodia, where for over a decade, USAID has supported many environmental projects.

“Currently, we are focusing on two biodiversity projects in the Prey Lang zone and the eastern highlands,” she said.

Sothira said USAID has worked closely with communities and ministries, local authorities and many other civil society organisations to protect Cambodia’s natural heritage.

“Once aware of common threats to biodiversity and livelihoods, Cambodians are inspired to protect their natural resources, ” she said.

USAID Cambodia Green Future in Cambodia is from 2019 to 2024 and costs about $5 million.

Ministry of Environment secretary of state Sao Sopheap said the government made Prey Lang a wildlife sanctuary in 2016. Spanning four provinces – Kampong Thom, Kratie, Preah Vihear and Stung Treng – it is under the protection of the Ministry of Agriculture, Forestry and Fisheries. 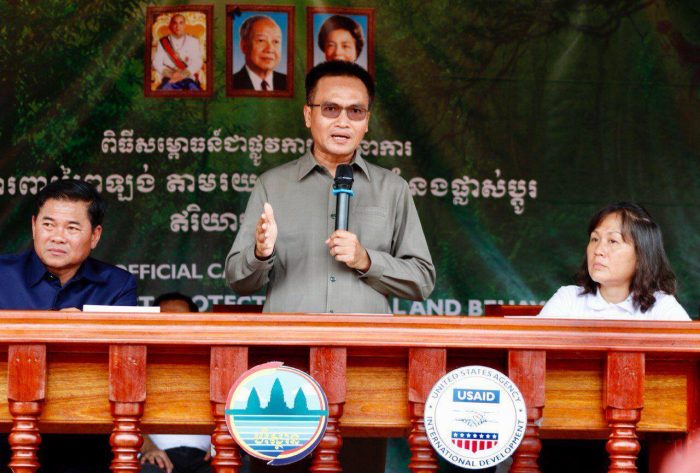 Prey Lang community representative Sor Yam from Kbal O’ Pranhak in Meanrith commune, Sandan district, Kampong Thom province, said the felling of trees in the Prey Lang Wildlife Sanctuary is quiet now. He said the community has banded together to protect it.

“More than 100 members of our community have joined forces to protect Prey Lang by patrolling and gathering information on forest crimes which we hand over to the rangers.

Kou Sopheap, a professor of Personal Growth and Virtue, Behaviour, Leadership, Buddhism and Psychology Development at Pannasastra University, joined the field trip with more than 10 monks.

He said the monks were happy to see the ministry and USAID lead the youth to Prey Lang.

Vat Thai, a third-year student majoring in Global Entrepreneurship and Innovation at the National University of Management, said she wants to get involved in protection activities.

All the photos are from the Facebook Page of USAID Cambodia Green Future.