The Embassy of India and the Ministry of Culture, Government of India recently hosted The Festival of India in Cambodia. There were two events held in February. One of the Buddhist Festivals with a Buddhist themed photo exhibition and the other, Ramayana Classical Dance Performance by the world acclaimed and well esteemed Kalakshetra Foundation, Chennai. 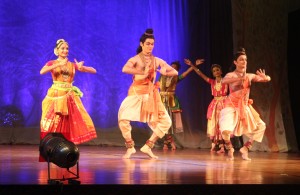 The epic Ramayana was performed by Artists from the famous Kalakshetra Foundation, Chennai, Tamilnadu, in Siem Reap province for two days at Sophitel Pokheetra Hall (14.02.14 and 15.02.14) and in Phnom Penh at Chaktamouk Theatre for three days (17.02, 18.02 and 19.02.14).
About KALAKSHETRA…

Kalakshetra was established in 1936 after the extraordinary success of Rukmini Devi’s first performance of Bharata Natyam at the Theosophical Society, in Adyar, a suburb of Madras, in the South of India. The founding members, Rukmini Devi, her husband George Arundale, and their associates at the Theosophical Society, were deeply committed to Theosophy and an arts academy was an extension of this commitment. The academy was also symbolic of the struggle for India’s independence; it was to culturally revive a country that was losing its identity under British rule. http://www.kalakshetra.net/history_1.html

The classic dance drama, not only showcased the rich cultural and artistic heritage of India but also served as a connecting link between many of the Asian countries. Ramayana is popular in various parts of south east asia, where the epic is adapted according to the country’s culture and life style. Even within India, Ramayana in each language, adapted from the original Valmiki Ramayana, has unique features of the respective territory.
As in many oral epics, multiple versions of the ramayana survive. In particular, the ramayana related in north India differs in important respects from that preserved in south India and the rest of south-east Asia. There is an extensive tradition of oral storytelling based on the ramayana in Indonesia, Cambodia, Philippines, Thailand, Malaysia, Laos, Vietnam, and Maldives. Father Kamil Bulke, author of Ramakatha, has identified over 300 variants of Ramayana. http://en.wikipedia.org/wiki/Ramayana
Here in Phnom Penh, Guests from various countries thoroughly enjoyed the rendition and felt the connect.

The performances were done under three themes, one on each day –
1. Jatayu Moksham
2. Choodamani Pradhanam
3. Mahapattabhishekam

These are some of the pictures which would explain the sheer beauty and poise of the dance and the stunning stage appearance and the almost real characters on stage!
1. Jatayu Moksham 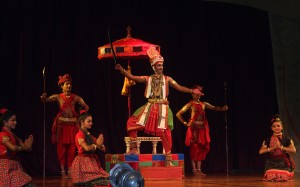 Please refer http://srimadramayana.blogspot.com/2007/04/choodamani-pradanam.html for the story of the episode.

war between brothers – vali and sugreevan

seethai gives her ornament to hanuman 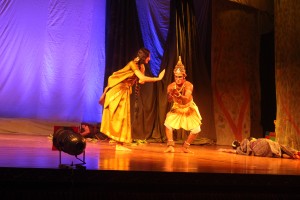 Read http://www.kalakshetra.net/maha_pattabhishekam.html for details of the story.

after the coronation with hanuman

The Performances were a class apart, with the incomparable discipline in the steps and outstanding co-ordination of movements, the super speciality of Bharata Natyam. The traditional way of having the vocalists and instrumentalists on the side stage, with live music was another feather on the cap!

Independence Hotel: The Place with History