Twenty-six percent of all Cambodian Internet users between ages 15 and 65 experienced some form of online harassment, according to the recently-released AfterAccess survey report.

Reports of online harassment were higher among women (29% of women aged 15-65 who use the Internet, vs. 23% of men), with most of the harassment being experienced while using social media platforms, the report showed. Cyberstalking was a concern among female social media users in Cambodia.

“Cambodia does better than Pakistan and India, both wealthier countries, in terms of mobile phone ownership,” said Helani Galpaya, lead researcher for the Asia components of the surveys and CEO of LIRNEasia, a regional ICT policy think-tank. “But considering all the attention that the telecom industry has received in the recent past, and the proactive measures being taken with regard to policy action in the field, the harassment number seems to be a reason for concern.”

The report also stated that only 11% of the 15-65 population responded “yes” when asked if they knew what the Internet was (without any explanation of what it is). Interestingly, 36% of the same population claimed that they used the Internet, when probed about use of Facebook, Gmail, WhatsApp and other Internet-enabled services.

“This is a phenomenon we first identified in Indonesia in 2012, when respondents told us that they used Facebook but not the Internet,” stated Senior Research Manager at LIRNEasia, Ayesha Zainudeen. “The AfterAccess surveys were conducted more recently, in September-October 2017. The higher use of Internet against awareness shows that even today, a large proportion of the 15-65 population in Cambodia lack understanding on what the Internet is.”

Related to lack of awareness is the fact that the key reason respondents gave for not using the Internet is not knowing how.

“The indicators are clear that in order to get more Cambodian people online, we need to create awareness on what the Internet is, and how to use it,” said Zainudeen.

But the picture is not completely bleary. Eighty-five percent of Cambodian mobile phone owners aged 15-65 used some kind of app on their mobile phone. This was the highest app use among all Asian and African countries surveyed. In addition, 52% of social media users indicated that they “always” verify the truthfulness of content on social media before sharing it.

The findings are part of AfterAccess, an international-award-winning effort to collect robust data on access to and use of mobile phones, Internet, social media and online platforms in the Global South.

“The available information on mobile phones and the Internet is supply-side provided or not representative of national populations. That makes it insufficient for governments and other decision makers,” continued Galpaya. “The only meaningful way to understand the ground situation is by talking to users (and non-users) directly. This is what we have done with the AfterAccess surveys.” 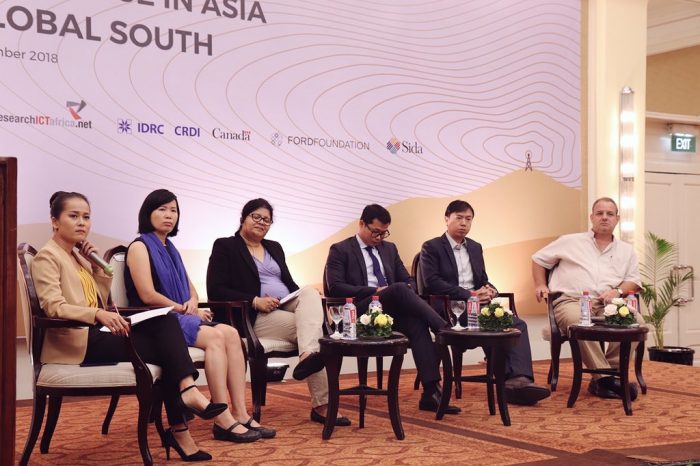 The AfterAccess report highlights key areas for development in ICT sectors of Cambodia, India, Pakistan, Bangladesh, Myanmar and Nepal. These include urban and rural as well as gender patterns in mobile phone ownership and Internet use, ecommerce, social media and online harassment.

“This data is highly relevant not only for policy-makers but also to the industry. It is already being used to inform ICT policy in India and we trust that Cambodian stakeholders will recognize its importance as well,” Galpaya stated.

In Cambodia, 2,100 households and individuals were surveyed from 100 villages in 25 provinces. The sampling methodology was designed to ensure representation of the target group (population aged 15-65) at a national level with 95% confidence interval and a +/-3.3% margin of error.

The methodology used in Cambodia is comparable across all 18+ survey countries in Africa, Asia and Latin America. The AfterAccess database is thus the most rigorous and comprehensive database on mobile phone and Internet access and use in the Global South. The current data includes information collected via 38,005 face-to-face interviews of households and individuals. The data allows for disaggregation by gender, rural or urban setting and age among other factors.

Other key findings from the Cambodia report:

Link to the report: https://lirneasia.net/2018/10/afteraccess-asia-report2/?fbclid=IwAR01Kz0U9cRxREdwsbVx_E0ABl4649_kcEXqFuMJ2VKYUYkBFtDjrXba8gw

Link to the presentation: https://lirneasia.net/2018/11/afteraccess-ict-access-and-use-in-cambodia-and-the-global-south-presentation/